Neural network classification of countries in the OECD

In the previous couple of posts I discussed the application of both regression (estimation of a continuous output for a given input sample) and classification (estimation of the class to which a given input sample belongs) machine learning methods with application to socio-economic data. Specifically multi-dimensional linear regression was used to estimate the average life expectancy for a particular country from a series of continuous socio-economic factors. Logistic regression was also used to classify if a country belonged to the OECD or not in a particular year. Here I will illustrate a way to build predictive classification models using artificial neural networks (ANN) machine learning algorithms.

The formulation of ANNs is inspired by the structure of the brain. They are represented as a network of interconnected neurons, and are used to learn both regression and classification functions from data samples comprising of potentially a large number of input variables. This general approach has produced state-of-the-art results in computer vision, speech recognition and natural language processing [1,2,3]. ANNs are also referred to as feed-forward neural network, multi-layer perception, and more recently deep networks/learning. Deep learning has come to represent applications in which the amount of feature engineering is minimised, with the machine learning tasks achieved through multiple learned layers of neurons. Each neuron undertakes a weighted sum over a series of inputs then applies a nonlinear activation function producing an output value, as illustrated below. For regression problems the rectified linear unit (ReLU) is a popular activation function. For classification problems the sigmoid or hyperbolic tangent functions as used in logistic regression are the most common activations functions. The input variables in a ANN are introduced into an input layer. These inputs are fed into a hidden layer of neurons. The outputs from the first hidden layer may then be fed into a second hidden layer. There may well be many hidden layers, with each layer learning more complex and more specialised behaviour. The penultimate hidden layer feeds its outputs to the final output layer. This typical structure of an ANN is illustrated below. Each circle represents a neuron, and the lines represent the interconnections. For a given network, the credit assignment path (CAP) is the path of nonlinear functions from an input to the output. The length of the CAP for a feed-forward neural network is the number of hidden layers plus one for the output layer. In recurrent neural networks a signal may pass through a given layer on multiple occasions, which means the length of the CAP is unbounded. 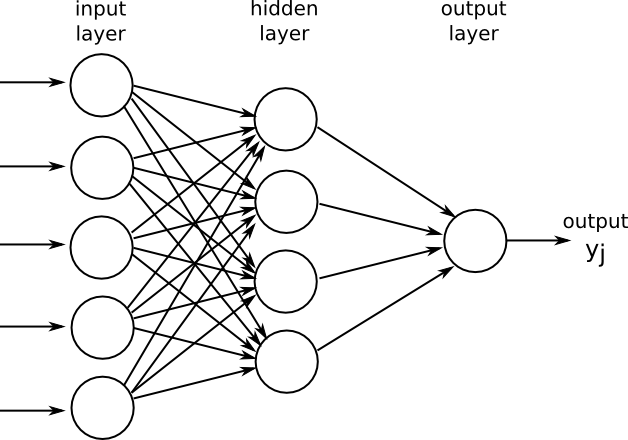 The weights in each neuron are learnt from the training data, such that they minimise a specified cost function. The cost function comprises of a loss (or error) function element that quantifies the difference between the value estimated by the ANN and the true value. For regression problems one would use a least squares error measure, whilst for classification problems a log-likelihood (or information entropy) measure is more appropriate. The cost function may also contain some additional regularisation terms which specify the relative importance put on minimising the amplitude of the model weights.

There are various frameworks available for creating ANN applications including:


As an illustration I have repeated the OECD classification problem solved in the previous blog post using logistic regression. To briefly recap the goal is to build a classification model determining if a particular country in a particular year is in the OECD on the basis of various socio-economic measures including: GDP; average life expectancy; average years spent in school; population growth; and money spent on health care amongst others. Here the classification problem is solved using a ANN with 12 input variables, one hidden layer comprising of 24 neurons, all of which feeding into one output neuron. A hyperbolic tangent activation function is used for the hidden layer neurons, and a sigmoid activation function for the output neuron. The model weights are randomly initialised using a uniform probability distribution. The code is written in python using the theano library. 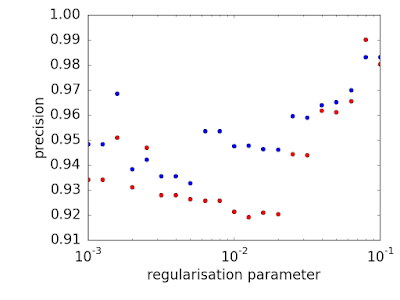 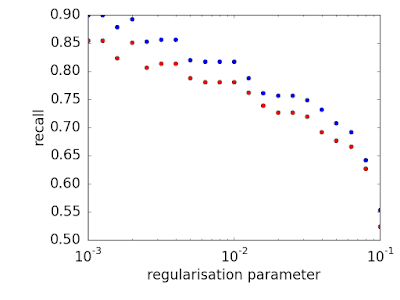 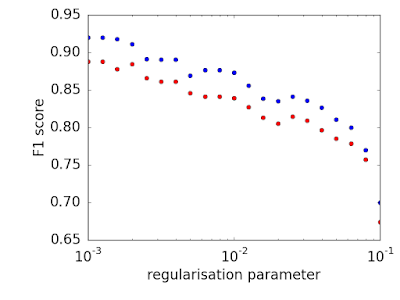 The ANN with the greatest F1 score over the validation data set has a regularisation level of 0.001. The learning curves illustrating the F1 curve as a function of the number of samples used to train this particular model is illustrated below. The fact that the learning curves of the training and validation data sets do not converge indicate that the predictive performance could be further improved with additional data. 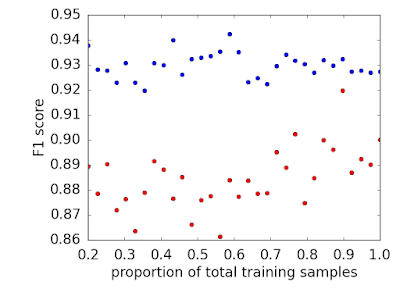 One final note, ANNs are biologically inspired learning algorithms, but the mathematical form of the neurons is far simpler than the behaviour of biological neurons. There are a range of methods that aim to more closely replicate the learning processes in the brain. The human brain actually consists of several levels (of which neurons are only one), each of which serve a slightly different purpose in the learning process [8]. Algorithms that attempt to replicate this process are refereed to as cortical learning algorithms.